Chevrolet defined American driving culture during the golden age of muscle. See it all here, in The Complete Book of Classic Chevrolet Muscle Cars: 1955-1974.

No other automobile in history so clearly demarcates a before-and-after line in the sand like the 1955 Chevrolet. This was the birth of the affordable performance car, and from the moment the car hit the streets, the experience of driving would never be the same.

The impact that an affordable American sedan with a powerful performance engine had on American society was so great that it not only changed the experience of driving; it changed the psychology of a generation. Prior to the introduction of the 1955 Chevrolet with its V-8 engine, cars had been considered necessary appliances, like refrigerators or vacuum cleaners. With a single stroke, Chevrolet turned American culture into a car culture.

Chevrolet dominated the muscle-car scene throughout the classic era. The Impala SS, with its 409 engine popularized by the Beach Boys, ruled America’s drag strips. The Z16 Chevelle Malibu SS396 became the every man’s muscle car. The Camaro turned the pony car genre into genuine muscle cars. The LS6 engine was the most powerful of the classic era. 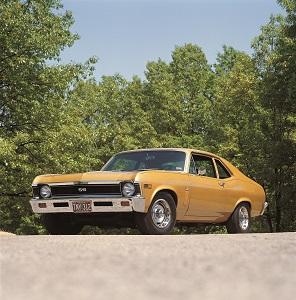 Chevrolet’s Impala SS debuted early in 1961 along with the 409. Most Super Sports built that first year featured 348 V-8s, as demonstrated here. Notice the absence of an engine badge on the front fender.

In 1969, the Super Sport package became an option, RPO Z25, available for Malibu sports coupes and convertible, Custom El Caminos, and (for the first and only time) 300 Deluxe coupes and sedans. Disc brakes were included in the Z25 deal.

There are no reviews yet.