Get ready for the definitive visual history of the Ford Mustang with the brand new Ford Mustang: America’s Original Pony Car. Fasten your seat belt and get ready for every Mustang worth hearing about.

In the early 1960s, Lee Iacocca–then director of the Ford division at Ford Motor Company–convinced Henry Ford II to produce a sporty four-seat car aimed at the emerging youth market. That car, essentially a reconfigured and re-skinned Falcon economy car, became the Ford Mustang, and it changed the automotive world like no other car before or since.

Created in cooperation with Ford Motor Company and featuring some 400 photos from its historic and media archives, Ford Mustang is a must on the bookshelf of any muscle car or Ford aficionado.

Ford dealers around the United States and Canada weren’t prepared for the onslaught. After slyly off-loading new Mustangs and hiding them in shops or outbuildings, dealerships opened their doors on Friday morning, April 17, and were overwhelmed by just how many car-crazed drivers wanted their first glimpse at Ford’s new Mustang. The stories have become Mustang lore:

In Texas, a dealer reported that 15 people were bidding on his last Mustang.

In Pittsburgh, a dealer was unable to bring a Mustang down off the wash rack because so many people were crowded underneath.

In Chicago, a dealer locked his doors for fear that the mobs endangered themselves and his employees.

One buyer slept in his car at the dealership until his check cleared the next day. In Seattle, a concrete truck driver was so mesmerized by the Mustangs on display that he crashed into the dealership’s showroom window.

The hysteria continued over the weekend as Ford dominated TV airwaves with Mustang commercials on Saturday and Sunday nights. According to Iacocca, more than four million people visited Ford showrooms over the April 17–19 weekend. Most dealerships sold out of their allotted Mustangs; salesmen wrote orders for 22,000 cars, creating a two month backlog.

Ford took advantage of the Mustang’s selection as the Indianapolis 500 pace car by readying replica hardtops for national sales contests. Winner of the Checkered Flag promotion traveled to Dearborn for a key presentation by Lee Iacocca. — Ford Motor Company.

If lots of decals were good, then more decals must be better. That seemed to be the thinking when Ford introduced the 1978 King Cobra, basically a Cobra II on steroids with a huge Cobra snake decal on the hood and large air dam under the front bumper. The King Cobra was Ford’s answer to the Trans Am Firebird, which prominently featured a screaming chicken hood decal as Pontiac, like Ford, scrambled to maintain a performance image with less horsepower under the hood.

While the Trans Am could still claim a piece of its muscle car heritage with an available 200-horsepower 400-cubic-inch engine, the King Cobra was restricted to the two-barrel 302 with just 134 horsepower. A standard four-speed transmission provided at least some semblance of the Mustang’s former muscle car image.

Offered for the hatchback only, the King Cobra package included blackout grille, color-keyed lacy spoke aluminum wheels, and dual exhaust tips. But it was the graphics package that attracted attention, especially the large, cobra snake decal on the hood that spread out around the rear-facing (and nonfunctional) hood scoop. Aerodynamic improvements included an IMSA-like front air dam, flares in front of the rear wheel wells, and the Cobra II’s rear spoiler.

Ford sold 4,318 King Cobras, many of them with T-tops that took the sticker price to $5,638, making the well-optioned King Cobra the most expensive Mustang II ever.

If the Pontiac Trans Am could have its chicken hood graphics, then certainly the King Cobra could counter with a huge snake hood decal. — Ford Motor Company.

How do you impress Lee Iacocca? That was the challenge for designer Michael Leone and coachbuilders Gaffoglio Family Metalcrafters when they crafted a true fastback version of the S197 Mustang with hopes that Iacocca would lend his name to the special edition. The fact that Iacocca had never put his name on a car made the task even more daunting.

Leone said the idea for an Iacocca fastback came when he spotted a new Mustang on display at a local mall. He sketched his ideas and took them to Iacocca, who was immediately intrigued. “I liked it so much that I said we’d better build it,” Iacocca explained. “It really brings back the fastback.”

Fittingly, the father of the Mustang announced the Iacocca Silver 45th Anniversary Edition Mustang on Father’s Day 2009. Built on the 2009 Mustang GT, the car added Leonedesigned front and rear treatments, hood, fenders, and fastback roof and a special silver paint chosen by Iacocca. Only 45 were built to commemorate the Mustang’s 45th anniversary.

Posing with the 2009 Iacocca Silver 45th Anniversary Edition, the image of Lee Iacocca with a Mustang brought back flashes of 1964. It was the first and so far only time that Iacocca’s name has appeared on a car. I Legacy Photo. 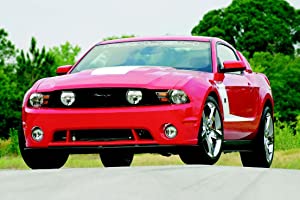 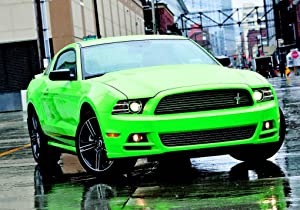 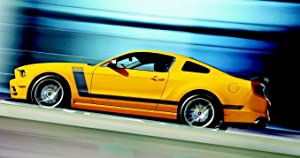 Roush’s spin on the 2010 Mustang GT resulted in the extra-sharp 427R, a carryover from the previous year but with new front valance and hood stripes. A ROUSHcharger supercharger helped produce 435 horsepower.

In the final styling update for the S197, the 2013 Mustang adopted a more prominent grille, similar to the Shelby GT500. New exterior colors included Gotta Have It Green, seen here on the Mustang Club of America edition.

Like 1969–1970, the modern Boss 302 was planned as a two-year program. For 2013, the Boss 302 returned on the updated 2013 Mustang with a modern interpretation of former designer Larry Shinoda’s reflective hockey-stick stripes. Engineers also tweaked front-end aerodynamics and cooling capabilities, which included a grille with pop-off foglight covers. The Laguna Seca lost its controversial red accents and returned with Sterling Grey stripes on either black or New School Bus Yellow.

There are no reviews yet.